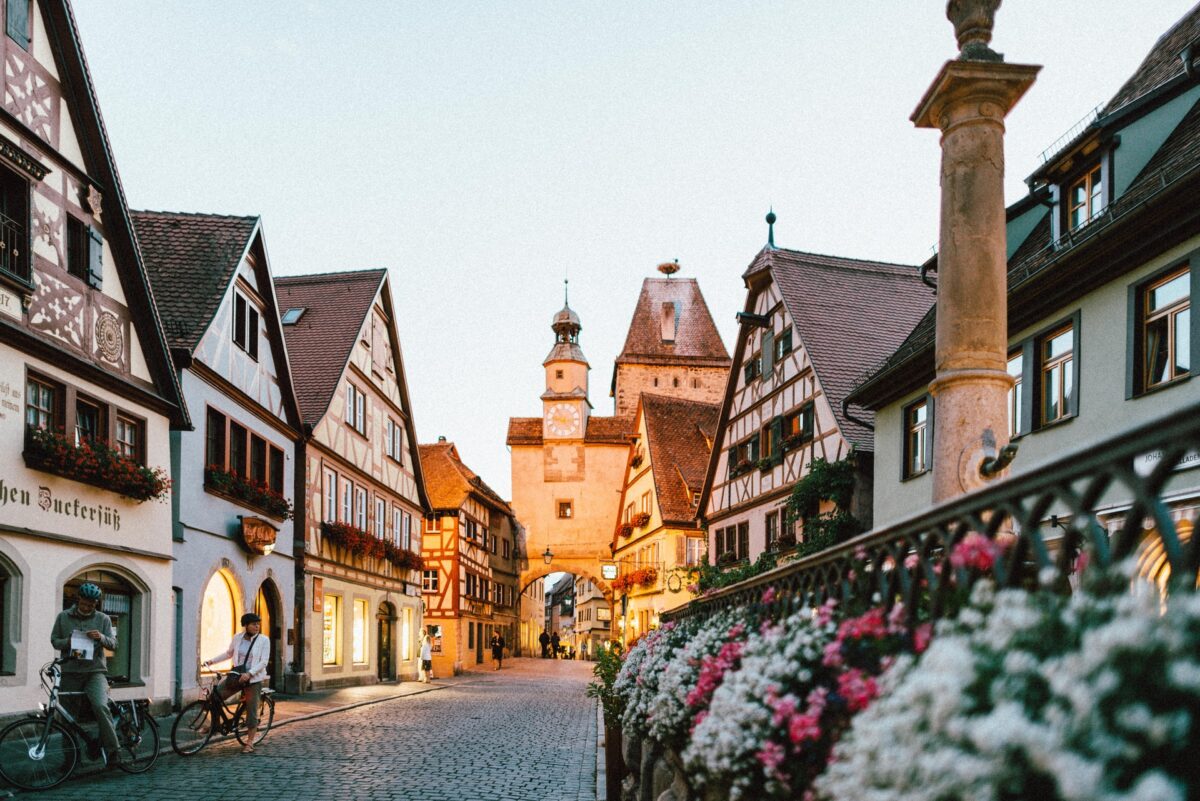 Located in the heart of Europe, Germany maintains the continent’s most powerful economy.

Here’s a look at the best places to visit in Germany.

The walled city of Rothenburg sits on a plateau over looking the Tauber river in Bavaria. Straight from the pages of a fairy tale, the town is famous for its extremely well preserved medieval center.

Be sure to visit the Town Hall, the seat of city government since medieval times. Climb the steps of the 13th-century hall’s tower for stunning views of the city.

Rothenburg is also famous for the stores that carry Christmas items all year round and for having an outstanding Christmas market each December.

Located in the Baltic Sea, Rugen Island is the largest island in Germany, connected to the mainland by a bridge and causeway.

Charming villas, romantic seaside resorts and beautiful beaches all draw tourists to Rugen Island, but the star attraction is the Jasmund National Park, famous for its unique chalk cliffs rising 528 feet over the sea.

Another notable feature of Rugen Island is Cape Arkona, East Germany’s northernmost tip, where tourists can visit an old lighthouse, remnants of a Slavic castle and a picturesque fishing village.

Stretching between the cities of Bingen and Bonn, Germany, the Middle Rhine flows through a dramatic geological formation called the Rhine Gorge.

This region features a spectacular landscape dotted with some 40 medieval castles, picturesque villages and terraced vineyards.

The region’s most famous natural attraction is the Lorelei, the deepest and most narrow section of the Rhine Gorge, which features a large, treacherous rock that caused several boating accidents prior to the 19th century.

The best way to experience the Romantic Rhine is by a riverboat cruise.

Situated on the Rhine River in the German federal state of North Rhine-Westphalia, Cologne is one of the most popular places to visit in Germany.

The city offers a vibrant array of attractions, buzzing nightlife and a stellar arts and culture scene.

Before it was severely damaged from World War II bombings, Dresden was known as the Jewel Box because of its lavish collection of stunning art and architecture.

After many years, the city has restored much of its former glory. The capital of the federal state of Saxony, Dresden offers a number of historic sites like the stunning Frauenkirche cathedral.

The city also boasts many cultural institutions of which the Semper Opera is most widely esteemed.

As one of the largest Baltic seaports in Germany, Lübeck is located in the country’s northern-most state, Schleswig–Holstein.

Founded in 1143, Lübeck served for several centuries as the capital seat of the Hanseatic League.

Although it was the first German city to be bombed and damaged during World War II, Lübeck still retains much of its medieval architecture,making it a popular tourist destination.

A walk through the narrow streets of the Altstadt offers views of historic sites like the stunning cathedral, the 12th century Town Hall and the old city gates of which the Holstentor is the most famous.

With historic treasures like the medieval Old Bridge, the Heidelberg Castle, the Church of the Holy Spirit and the Knight St. George House, it is no wonder that Heidelberg is a popular tourist attraction.

Home to Germany’s oldest university, Heidelberg’s long academic history can be retraced along the Philosopher’s Walk, a scenic footpath often walked by many earlier philosophers and professors.

The most photographed building in Germany, Neuschwanstein Castle, is also one of Europe’s most popular tourist destinations.

Nestled among the breathtaking beauty of the Bavarian Alps near the town of Fussen, this fairy-tale castle served as the inspiration behind Walt Disney’s Sleeping Beauty Castle.

Constructed in the late 1800s, Neuschwanstein Castle was never built for defense purposes as most castles.

Instead, this castle was created as a fanciful-re treat King Ludwig II of Bavaria who had a reputation for abiding in daydreams instead of reality.

Best known as the origin of the world famous Oktoberfest, Munich is one of the best places to visit in Germany with a great culture scene.

Munich is home to several sophisticated opera houses and theaters like the National Theatre.

The city center is an attractive blend of classic and modern architecture, teeming in historic churches, medieval walls and royal palaces as well as bustling shopping centers and nightlife venues.

Munich’s Oktoberfest began in 1810 with a royal wedding celebration.

Today, this famous festival draws millions of visitors every year to take part in the revelry that involves several gigantic beer tents, delicious Bavarian food and millions of gallons of beer.

The capital city of Germany, Berlin is widely associated with its World War II history and former division of East and West Germany by the Berlin Wall during the Cold War.

Since the fall of the historic wall in 1989, Berlin today is now a vast, unified city diverse in ethnic groups and abundant in sight seeing attractions, culture and nightlife.

Many tourists are drawn to Berlin’s famous historic structures, which include the Brandenburg Gate and the Reichstag.

Although most of the Berlin Wall was demolished,there are some portions still standing near Checkpoint Charlie and the Reichstag.